If you're new here, you may want to subscribe to my RSS feed. Thanks for visiting!

Yesterday was casual day at work…thanks to no external clients being on site…so I decided to bust out the old San Diego Marathon pull over and rocked it to work. It was funny wearing that yesterday got me to thinking about our first marathon and how much my racing, and maybe running in general, mindset has changed. I can remember it like it was yesterday running San Diego in June 2008, Lindsey had decided that she was going to run a marathon before our wedding which was in June and I think that she was recruiting Brooke to run it as well…or maybe the other way around but I horned in on the action. I couldn’t let Lindsey complete something like this without me giving it a shot. You know it’s not like we had a lot going on that summer or anything in between buying our first home and getting married in August we thought hey why not run a marathon while we are it. I’m not really sure whatever happened to Brooke…but she finally got her first at Green Bay 2 years later and I think might be going for another one when we run Flying Pig in May.

Our training began on Superbowl Sunday, Super Bowl XLII you know the one when Eli and Giants beat Tom and the Pats to ruin the perfect season…we could all hear Mercury Morris and his Dolphin teammates popping the champagne when Eli threw that final touch. If you can calculate that is a 16 week training plan…way too long for me anymore but hey we were new and wanted to make sure we had the endurance ability. We ran 10 miles straight up and down Meridian St. because we knew it would be easy to track distance since we lived downtown at the time. From what I remember that is probably once of the only “distance” runs that we ran the right number of miles for with the SDM. We had the genius plan on the really long days to just run to time…so we would end up running for 3 hours around Indy and would probably cover up to 22/23 miles. We have learned from that one for sure. The rest of the training like that first training run was a lot of first for us: the first time we can more than 13 miles, then 14, 15, and so on…you get the idea.


Flash forward 15 weeks and we are in San Diego for the race…that was the second time I flew with Lindsey and that is a marathon in itself to get her through a flight. We went out to SD a few days before the race. Lindsey’s great aunt and uncle picked us up from the airport and let us stay at their house the first night until my parents arrived on Friday. So when we went to the expo downtown to pick up our packets Lindsey got to talking with a San Diego Running Club and decided that she was going to see if she could run a 3:40 and qualify in her first attempt. Now we had trained the entire time to run together and just try to beat 4 hours…so this was a big development late in the game. But we had our new pace bands thanks to the running club and were going to give it a shot in the morning.


We enjoyed Old San Diego and Coronado kind of speculating the whole time what was Sunday going to be like…because we had no idea what to expect. I’ll never forget the night before the race we went and ate some Italian food with my parents and got back to the hotel early to try and sleep. The race had a 6:30 gun time so we went to bed very early and maybe about 20 minutes after we lied down an Indian baptism or some sort of baby party began blasting house music from down the hall. If anyone knows Lindsey she does not take a lot of crap when it comes to getting her sleep. She was quickly up and at the front desk asking to be moved and why we were placed so close to the conference room when the hotel was not full and they knew the party was going. Lindsey being Lindsey we were moved and scored a free night’s stay out of the deal. 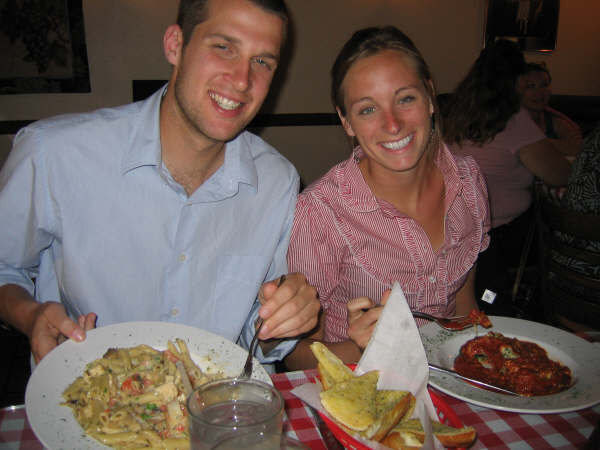 Hossing on that delicious Italian Food

So come race morning, Dave, my dad, had us down to the starting line at about 5 am local time…as that is what the marathon people said we needed to. Haven’t made that mistake again. We probably cut it a little too close now on corral arrival (had to run to STL and CHI to get in time) but standing around waiting was torture since our nerves we’re getting to us getting ever closer to that gun going off and us starting on our 26.2 mile journey for the first time.


Now the actual race itself is kind of blurry for me…a mixture of baking California sun, cursing mile marker signs, and bad rock bands. I do distinctly remember running out of Balboa Park towards downtown San Diego and the Gas Lamp/Gas Light District and thinking I am way too sweaty at this point this early in a run that can not be a good sign. Lindsey and I ran together I think for the first 17 or 18 miles and the last couple of those she was slowing down to stay with me as I was hitting the proverbial wall in my first marathon attempt. Lindsey and I decided to part ways at 19 as she went on to pursue the Unicorn of the Boston Marathon. We did get to see each other one more before the finish and it was on this weird out and back at mile 22/23 in this industrial part of the course. I remember thinking how man I could just jump in with her and cut out the mile or so that I have lost…no one would ever have known. But I didn’t I limped on hungry and thirsty as ever.


The race ends at the military base in San Diego, can’t remember which one, but I do remember coming through the finishing chute and seeing the service men and women on the side cheering us on and remember what a great sight that was. I crossed the finish line just under 3:50…so I had beat our original goal of breaking 4 but could not help but feel slightly jaded as I got dropped by Lindsey. As I can admit this now Lindsey was a stronger and may still be a stronger runner than I am. It took a couple of minutes to find Lindsey after the race but I finally did and asked her her time: 3:39:49…she just made it for Boston. Qualifier on the first attempt. You don’t hear that to often. Maybe the Boston’s women’s times are too easy…another blog for another day.


When I think back on this race it is funny how much things have changed in our marathon running. No matter how much you think you prepare for that first one you just never know until you hit 26.2 mile marker what will happen out there. After that first race, I didn’t know or think about running another marathon but I can say the seed had been planted…to become a repeat marathon runner. It was something indescribable still today that I have trouble pinning down that keeps me coming back. As I get ready for my 8th and 9th marathons this spring and my attempt at qualifying myself, I will always remember the first one. 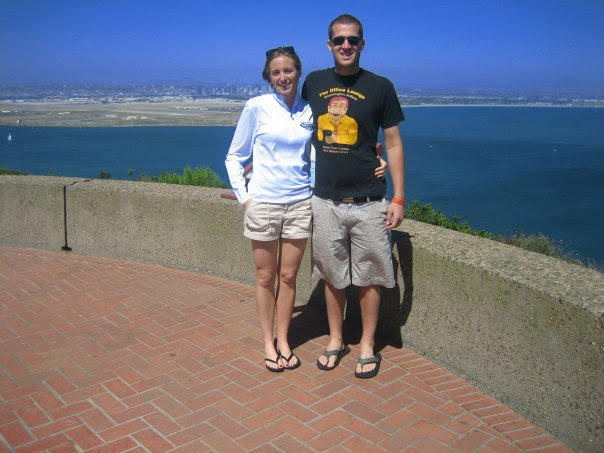 Day we arrived to San Diego 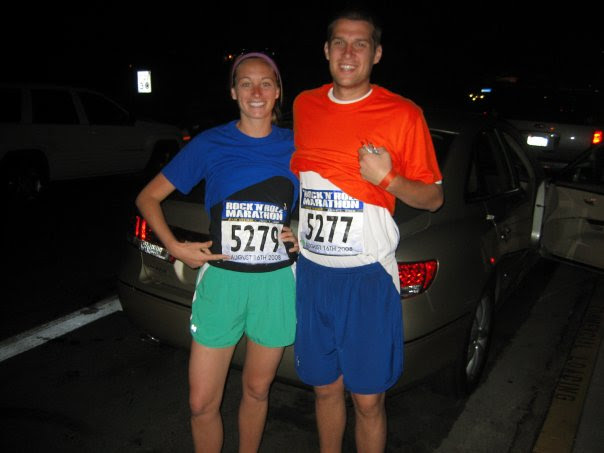 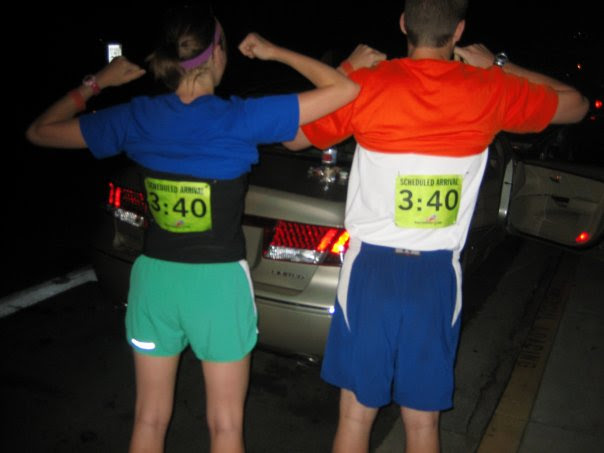 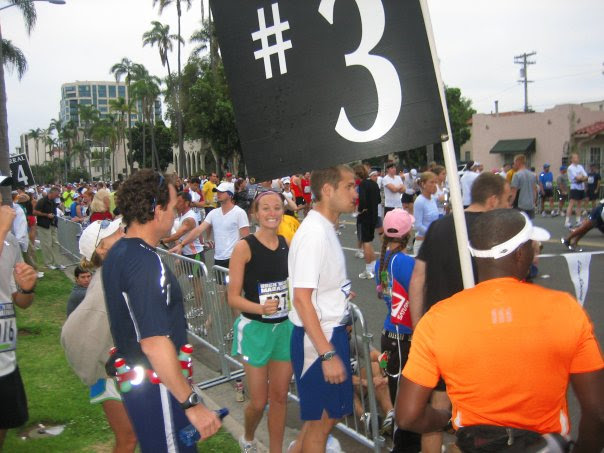 Hopping in the corral probably way too early! 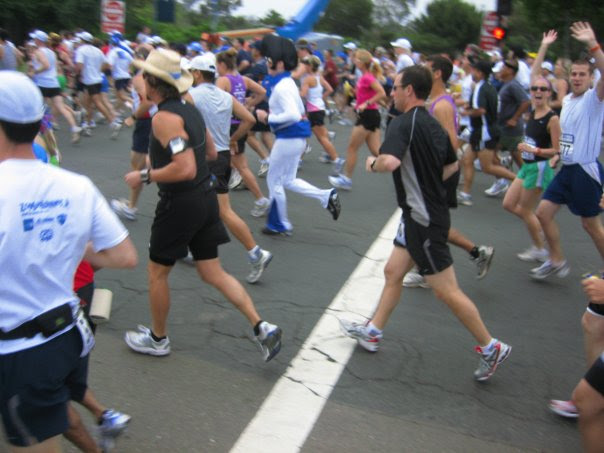 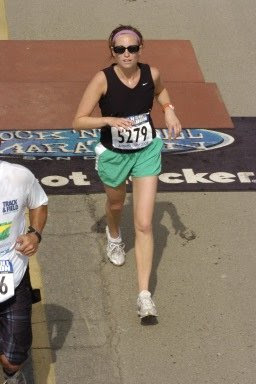 Lindsey probably wondering what the heck she got herself into… 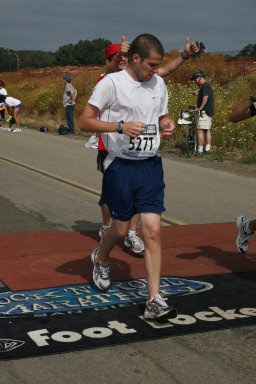 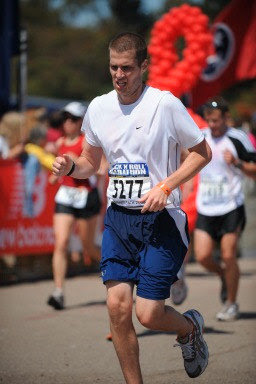 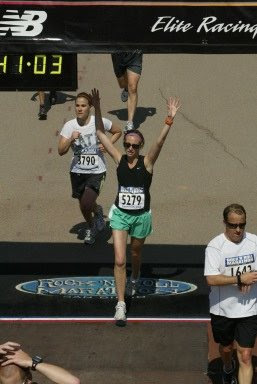 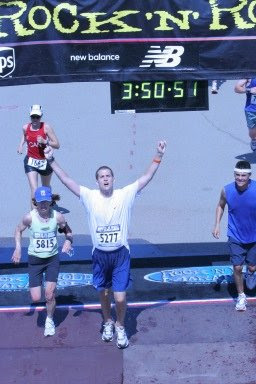 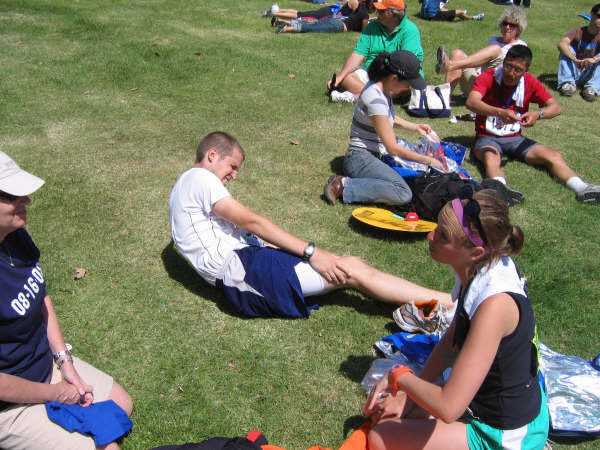 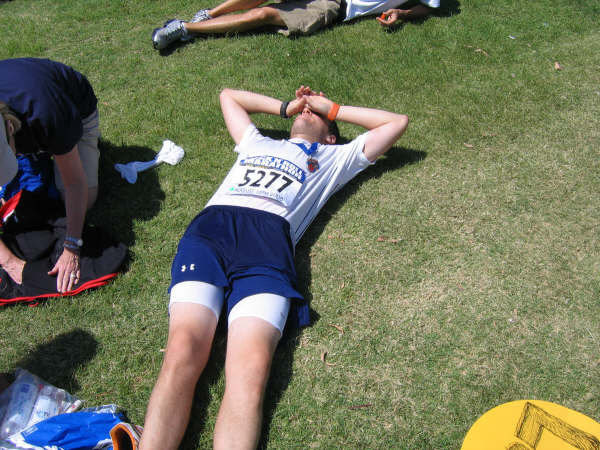 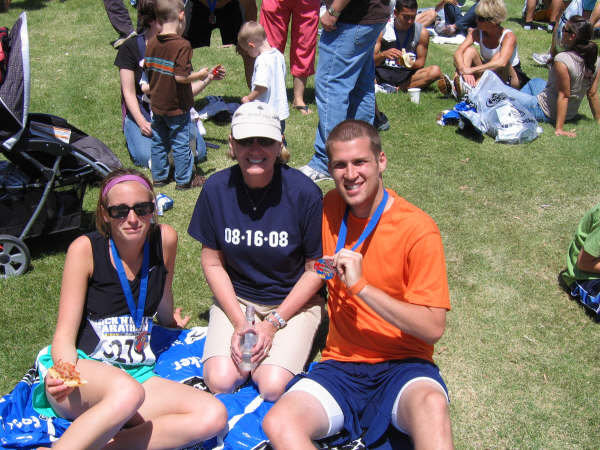 With Peg – SO happy to be done. 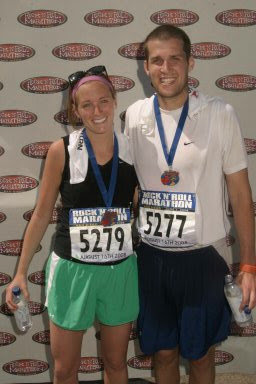 1st Marathon Complete!  Little did we know what kind of addiction we had started….. 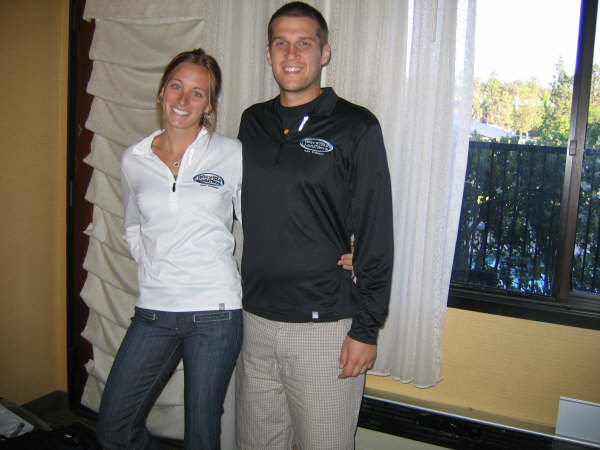 Dorks in the same shirt.  We actually both wore those shirts on Saturday’s 10.
Still dorks.